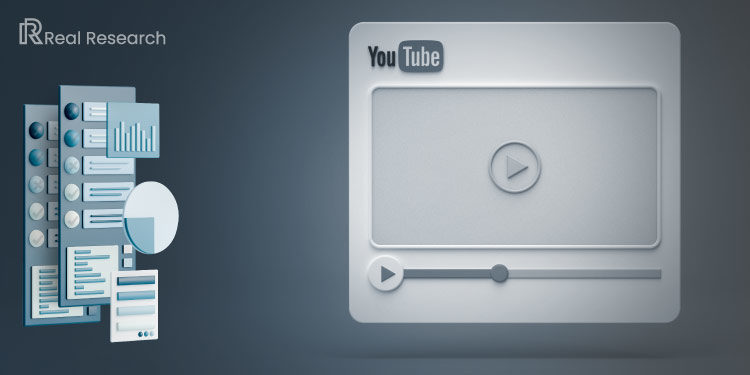 Since its launch in 2005, YouTube has wholly transformed becoming the biggest online video destination for millions of users around the world. The platform features a wide variety of corporate and user-generated content. This ranges from trending news, music, gaming videos educational clips, and so much more.

Being the second most-visited site in the world, the Real Research survey showed that a number of users visit YouTube daily for at least an hour. In actual fact, every day, people watch over a billion hours of video and generate billions of views in 100+ countries.

On another note, most people dislike the compulsory ads displayed on YouTube while streaming video. The pop-up ads interrupt their video experience. Hence, users opt to utilize YouTube Premium services where they can access ad-free videos and music.

According to the survey, around 85% of the participants use YouTube. This shows that the video-sharing site is one of the most popular online platforms across the globe. When people want to learn, laugh, catch up on trending news, listen to their favorite music, or just lean back for a show, people can find whatever they’re looking for on YouTube.

The platform is available in 100+ countries around the world, across 80 languages. Hence, it’s among the reasons most people utilize the platform. On contrary, a small number of people do not use YouTube. A little above 15% of the respondents revealed that they do not access the site. There are likely to be a variety of reasons why some people don’t use the site. However, the overall response shows that the majority of people use YouTube.

Nearly 40% of the respondents utilize YouTube for less than an hour on a daily basis. Daily social activities such as going to work and attending school are among the list of why they spend less time on the platform.

Following this, 24% of the participants watch for less than two hours. Accordingly, 15% of the respondents noted that they spend less than 3 hours on YouTube. Interestingly, 9% recorded that they spend more than 5 hours a day with only 2% confirming that they do not use the platform at all. All-in-all with new content uploaded often, most people are bound to use YouTube on a daily basis.

When asked why they watch videos on YouTube, 45% said they watch to acquire various information. The latest news, series, movie trailers, celebrity gossips, and so much more are present there. It’s a one-stop destination for literally everything and YouTube content creators make sure of that.

Additionally, 24% gave the response that they watch YouTube videos to get the latest trends. YouTube always has the pulse of what’s trending. Viewers can check out the latest music videos, comedy clips, and other videos that people are watching the most.

Also, 16% of the participants responded that they mainly watch YouTube videos because of boredom. With a unique algorithm, YouTube gives suggestions on entertaining videos that one can watch. Moreover, video is one of the most popular content formats that keep people entertained.

Some respondents (11%)also implied that they watch YouTube videos for other reasons. Overall, people visit YouTube for a variety of reasons. The major reason is they seek to be informed through the content found on the site.

The survey shows that more than 80,000 users are satisfied with YouTube.

Most of the videos on YouTube have high audience participation and watch time. One can probably assume that this is because a majority of people are satisfied with the content displayed on the site. Not only is YouTube the most popular video platform on the planet, but videos themselves are also highly shareable. More so, the videos are budget-friendly in most countries.

Notably, almost 70% of users are bothered by watching compulsory video advertisements on YouTube. Video ads on YouTube may appear pre-, mid-, or post-roll while viewing content. These can be up to 15-20 seconds long (depending on where the viewer is based).

Most of the time, viewers must watch the ad before they can watch the selected video. Though the ads have an option to skip, others are non-skippable. These ads often do very little to enhance the online experience or make users want to buy whatever is being promoted.

It usually frustrates users, interrupts video flow, and even makes them more impatient, leading them to switch off or click elsewhere.

Alternatively, above 65% of the users are willing to pay to skip YouTube advertisements.

Users can easily dismiss ads on YouTube because they are likely uninterested from the outset, and they are willing to pay to skip adverts. In detail, YouTube runs ads run on their videos as long as they meet its advertiser-friendly guidelines.

However, most videos are not even relevant to the person watching videos. Hence, the majority of respondents are willing to pay to skip the compulsory ads on YouTube. With this, users can watch videos without being interrupted by frequent pop-up ads.

Another factor that is considered by the viewers is that videos are able to be saved for offline viewing. According to the Real Research survey, 24% noted that offline viewing is important.  Another 15% of the respondents stated that they use YouTube Premium services to access YouTube original movies and videos.

Most YouTube Premium subscription perks are as good as they sound. YouTube Premium’s ad-free experience is pretty much a necessity for anyone that spends a significant amount of time on the platform. Also, a variety of artists, genres, and movies are found on YouTube Premium.

Active Members on YouTube Are Male Gen Z and Millennials

When respondents were asked to state their age, the survey showed that the most active age group on YouTube is between 19 to 29 years of age. This constitutes 68% of the respondents. While YouTube certainly has remained a leading platform of user-generated content, it has come to serve a far wider demographic of the young generation.

This age group consists part of the Millennials and the Gen Z age group. It’s considered a generation that mostly researches through gadgets and technology. Reading books is somehow a phase that is passing out among this age group. Thus, watching online videos on YouTube fascinates them and captures their attention.

Lastly, according to the survey, the most dominant gender on YouTube is the male gender.

The survey showed that males access the YouTube site more than females do. While it attracts an increased number of women and men, YouTube is still fairly male-dominated. Men spend more time on the site viewing a variety of videos. Male-dominated categories include sports, gaming, bodybuilding, news, and so much more.