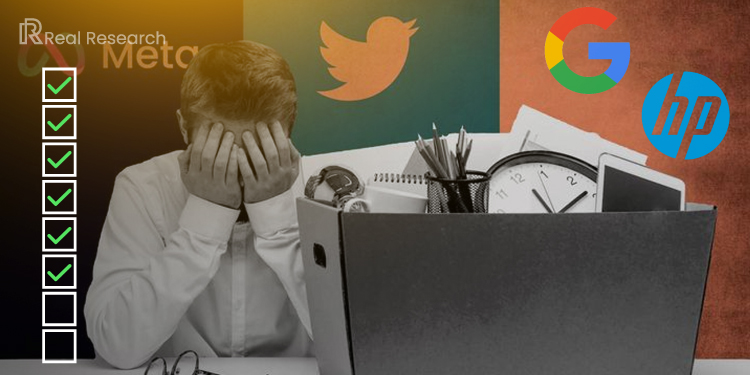 Public Opinion on the Layoff Season With Tech Giants, Twitter, Meta, HP, Google, Microsoft, and Others

Layoffs and hiring freezes are on the rise at tech companies. Numerous companies have laid off employees primarily to cut costs. Big names such as Twitter, Stripe, Salesforce, Meta, and others have announced layoffs since November 1.

New York Times first reported Amazon was planning to lay off 10,000 people across its “corporate and technology” departments. Before that, Meta, Facebook’s parent company that includes Instagram and WhatsApp, announced job cuts affecting at least 13% of its workforce.

The ‘boom’ experienced by the big tech industry during the pandemic has been attributed to the lockdowns that forced many people indoors. The widespread lockdowns prompted more people to shop online, use social media, and stream content, subsequently increasing demand.

However, the demand for the above products and services reportedly declined after lockdowns were lifted across the world and people were allowed to go outside. Furthermore, the high inflation in the United States and other global economies caused companies to cut short their spending on digital ads and promotions.

According to reports, Amazon planned to lay off employees by this week, focusing on its devices division, several products, such as Alexa and appliances, and its human resources division. If confirmed, Amazon’s layoffs would be its largest ever since it has been a stable employer in tech for decades. Similarly, Tesla CEO Elon Musk took over Twitter in a $44 billion deal earlier this year, firing at least 50 percent of its workforce.

In light of all this, Real Research is conducting a survey to collect public opinion on the same.

Hence, hurry and answer the public opinion on the layoff season on the Real Research app from December 02, 2022. After that, you will receive 40 TNCs as a reward.

Note: This survey is closed. You can view the results here – 58% Blame Overexpansion for the Layoff Season.