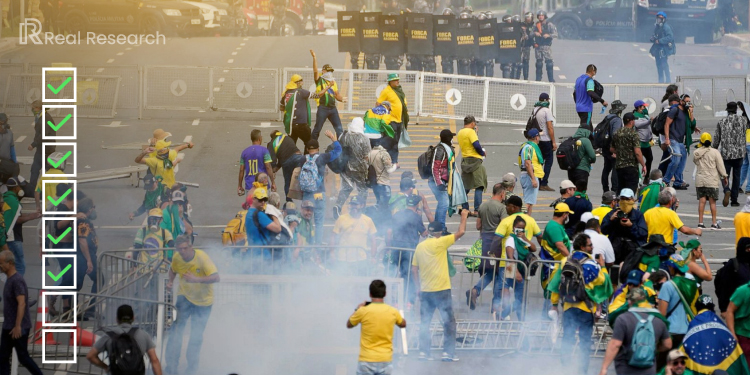 Just a week after President Luiz Inácio Lula da Silva was sworn in as the new President of Brazil, rioters stormed the country’s Capitol. Brazil’s new president referred to as “Lula,” won the presidential election by a very narrow margin against Ex-President Jair Bolsonaro. Notably, Lula served two terms as Brazil’s president from 2003 to 2011 but was also judged and convicted for allegations of corruption in 2018.

Pro-Bolsonaro supporters stormed the Brazilian Capitol on January 10, 2023. 4,000 gathered between Saturday and Sunday morning in front of the parliament. By Sunday afternoon, they marched towards Congress and eventually broke through police barriers and invaded the government buildings. Rioters stormed the Congress, damaged artwork and furniture in the Presidential Palace, smashed the glass, and vandalized the chamber of the Supreme Court building.

Notably, security officers were reportedly slow to react to the riot. Onlookers posted videos on social media that showed some officers simply filming the violence rather than intervening to stop it. This prompted many to question whether authorities had ignored numerous warnings, underestimated the rioters’ strength, or somehow been complicit.

Security arrested over 1,500 rioters in the aftermath — some armed with knives, axes, and even grenades. By Tuesday, over 500 people were released, mostly the elderly, people with health problems, mothers with children, and the homeless on humanitarian grounds. Most of the rioters deny any wrongdoing following their release.

Thus, Real Research, an online survey app, has launched a survey on the public’s opinion on Pro- Bolsonaro Riots in Brazil to find out what the public thinks about the riot, its aftermath, and its implications for Brazil’s future.

So, hurry and answer the survey: Public Opinion on Pro-Bolsonaro Riots in Brazil on the Real Research app from January 13, 2023. Afterward, you will receive 70 TNCs as a reward!