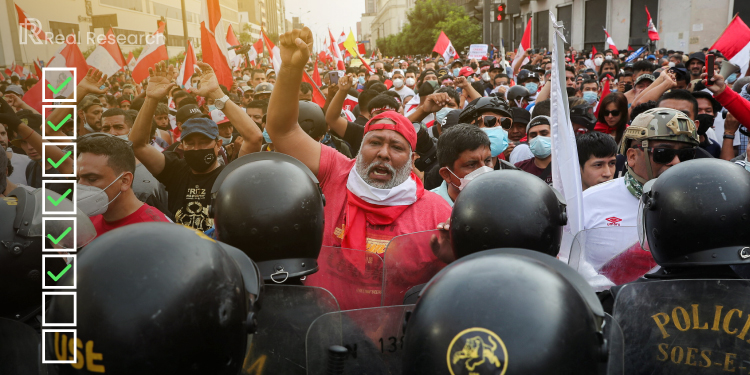 Mass Protests have been going on in Peru since March 2022. How and why did this happen? The protest commenced when the Peruvians began experiencing rising prices (inflation), especially on fertilizers and fuels. Moreover, Peru, as a country heavily reliant on imported fuels, underwent further economic complications when the West implemented sanctions against Russia as a result of the Russia-Ukraine war.

On top of the rising inflation rate, President Pedro Castillo was subject to six corruption investigations and according to Peruvian laws, the president cannot be prosecuted. Many Peruvians are angry and have decided to march and protest in various cities of Peru in the hopes of overthrowing the Peruvian government.

Protestors were reportedly waving the national flag of Peru and chanting anti-government slogans while marching in the capital Lima. The government tried to control rising protests by sending in the police to reduce any further damage.

In the government’s defense, however, there were attempts to resolve the rising fuel price crisis by reducing the 30% tax on fuel, but gas companies refused to lower their prices on various grounds. Therefore, the issues were a never-ending cycle of problems, further enraging already-frustrated Peruvians.

President Castillo has also allegedly faced two impeachment attempts, and reports are claiming that the opposition is to launch a third impeachment.

While the protest continues in Peru and many have raised their voices regarding this issue, more public opinion remains left to be heard. Real Research hopes to understand the public’s opinion about Peru’s anti-government protests and clashes.

Hence, hurry and answer the survey on the anti-government protests and clashes in Peru amid economic crisis on the Real Research app from November 28, 2022. After that, you will receive 50 TNCs as a reward.

Note: This survey is closed. You can view the results here – 52% Find the Corruption Charges Against Peru’s President Completely True.