Survey on Artist Banksy Accusing GUESS of Stealing His Artwork 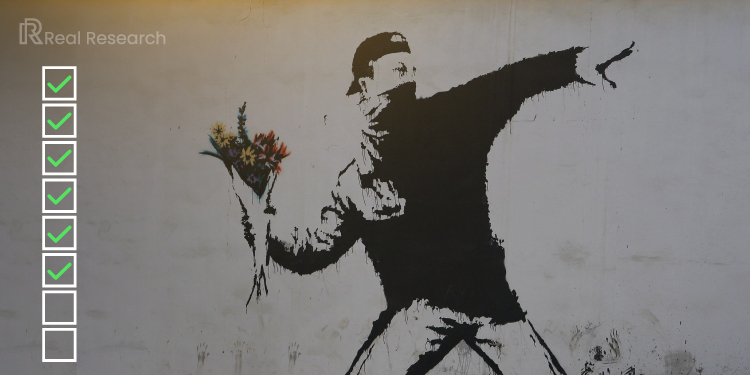 Survey on Artist Banksy Accusing GUESS of Stealing His Artwork

Since his debut on the art scene in 1993, an anonymous British graffiti artist known as “Banksy” has remained a mystery. His art, frequently displayed on public bridges, tunnels, and walls, contains dark humor and political and social commentary.

Although he rarely does interviews, they have always been through emails or voice meetings. Till now, his actual entity remains unknown, but his creativity extends to the screen. According to Reader’s Digest magazine, Banksy’s identity remains unsolved and mysterious in the art world.

Recently, Banksy accused the clothing company GUESS of featuring his artwork without his consent. In an Instagram post, he said:

“Attention all shoplifters. Please go to GUESS on Regent Street. They’ve helped themselves to my artwork without asking, how can it be wrong for you to do the same to their clothes?”

However, many fans were not ready to hear a controversial post from Banksy as it promoted violence and criminal offense. The post mainly has negative replies.

“Fight your own battles, Banksy. Do it yourself, mate,” said one user.

Nonetheless, it’s unclear how serious Banksy’s post was, or if the artist was personally consulted about the clothing line before it was launched.

GUESS wrote in a statement that the collection was created in collaboration with the company Brandalised, which reportedly has a license to commercialize and use Banksy’s artwork on products.

Some commentators suspected that Banksy’s Instagram post criticizing Guess was part of a “guerilla marketing campaign” (which would be consistent with the artist’s unconventional approach). As a reply, GUESS has temporarily closed down the store in Regent Street and covered the artwork with boards, and placed security.

As controversial as it may sound, Real Research launched a survey to gather further insights on this subject, aimed to see actual responses. Hurry and answer the survey on Banksy accusing GUESS of stealing his artwork on the Real Research app from November 24, 2022. After that, you will receive 40 TNCs as a reward.