NASA Studies: Space Tourism is No Longer For the Future

Space Tourism is No Longer For the Future 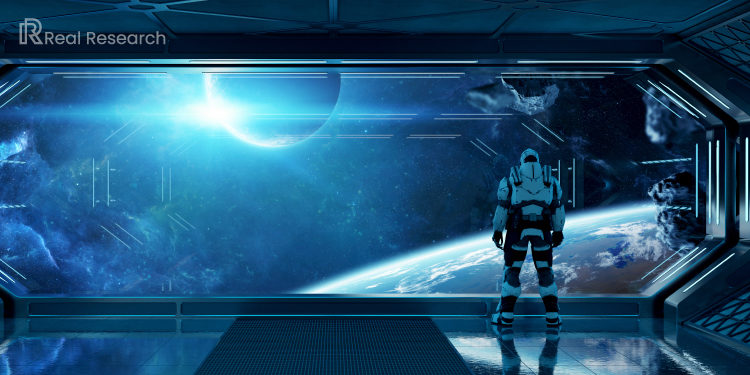 In the year that marks fifty years since the Apollo 11 landing on the Moon—the event that marked the first time humans set foot on the Moon—RR News analyzes studies by NASA and Pew to understand the future of exploration and space tourism.

NASA believes that five decades of human activity in space have generated societal benefits that enhance Earth’s quality of life. So far, the United States remains at the forefront of space exploration. Other countries, such as Russia or the United Arab Emirates, are also taking significant steps in this journey.

The first satellites, created to investigate the space scene and primary test capabilities in Earth orbit offered significant knowledge to our astronomers on the ground. It paved the way to our initial progress:  the development of satellite telecommunications, global positioning, and advances in weather forecasting. Over the years, with space exploration gaining worldwide importance, curiosity to know space began to grow. Having a foot on the Moon or Mars by humankind became possible and produced an insatiable hunger for more. Today, in addition to satellites that provide us with daily information, we have unlocked the possibility of expanding our touristic horizons beyond the Earth’s orbit.

An Outlook on the Journey Between Earth and Space

It may have seemed impossible, but it was through space exploration that scientists discovered that Earth is not flat, but round. The same phenomenon made it possible for us to know that the Earth rotates around the sun and not the opposite.

According to NASA, in its study named “Benefits Stemming from Space Exploration”,  due to the start of space exploration, it became apparent that space travel was a valuable driver for elementary science and technology.

The new world’s difficulties called for new approaches. The expenses related to launches pushed designers to improve spacecraft computers. They made computers lighter, smaller, and more suitable for higher performance and dependability. According to the same study, solar cells, batteries, and fuel cells were created because of space needs and benefitted many sectors on Earth. The initial satellites were produced to examine the space environment and test initial capabilities in Earth orbit. They also contributed with crucial information for developing multiple communications, as previously mentioned.

Observe the photos of Mars taken by Nasa’s Mariner 9: Olympus Mons, 45 years ago.

Travelling Outer Space: Not Only a Science

SpaceX and Orbital Sciences are, according to the Pew Research Center, the two benefits of a recent transformation into the American Space program toward privatizing more routine missions. Of these missions, the transport of supplies and eventually people to and from the International Space Station (ISS) stand out.

After all the costs associated with NASA’s missions, SpaceX ultimately referred that it hopes to drastically lessen the cost of launching cargo and people into space by eventually making both the first and second stages of its rockets reusable. See the chart below for the cost comparison between NASA and the two leading private air exploration companies.

In 2020, SpaceX heralded the beginning of something unquestionably not routine: the use of private, reusable rockets to service America’s Space program.

History was made with the first private rocket transporting NASA astronauts to Mars on August 7, 2020, at 1:07 AM. Falcon-9 is the name of the project and, according to the same article by Pew, promises to lower the price of trips to Mars. After refueling, Falcon-9 is supposed to be quickly re-launched, decreasing the cost for a trip to the ISS as low as from $5 million to $7 million.

According to National Geographic in an article about billionaires Space travel plans, it was almost 20 years ago—in 2001—that the American businessman Dennis Tito became the world’s first Space tourist to pay his way. The trip was about eight days with the Russian spacecraft orbiting Earth 128 crew and cost $20 million. During the following years, six space tourists followed in Tito’s footsteps, with tickets reaching $40 million.

It seems from a different world—quite literally—but it is already possible to travel outer space, and the number of companies promising more affordable prices keeps rising. Space tourism has become a trending topic in the travel industry.

Multiple companies, including the aforementioned Elon Musk’s SpaceX, Richard Branson’s Virgin Galactic, or Jeff Bezo’s Blue Origin, rush to perfect their intergalactic flight trips. Some of the wealthiest businesspersons in the world believe in the future of space tourism and are doing everything possible to make these trips “from this world.”

Space Tourism: The Future is Now

RR found promising prospects about space Tourism. However, according to National Geographic’s article, many remain skeptical about the future of space travel. In a Pew Research about the future of outer space tourism conducted in America, half of the respondents considered routine space travel would happen in the next fifty years, as you can observe in the chart below. In the meantime, business people can continue to reach for the stars. 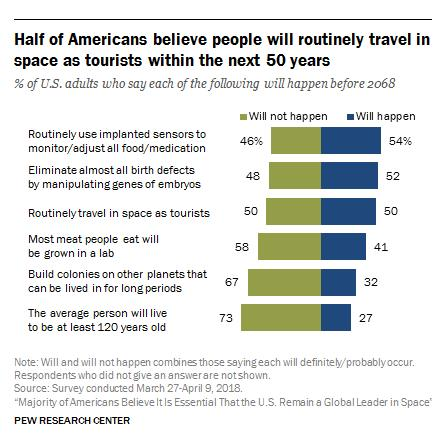 What continues to limit this type of tourism from remaining mainstream is, in addition to the apparent factor of high costs and the need to muster up the courage to board, the lack of technology, and governmental permissions in several countries. According to JWU Online, the good news is that experts assume space flights could have significant socioeconomic impacts.

According to the same article, space travel could positively affect life on Earth by generating new jobs, helping educate citizens about the universe, paving the way for extraterrestrial investigation, and building new solar-based energy infrastructure.