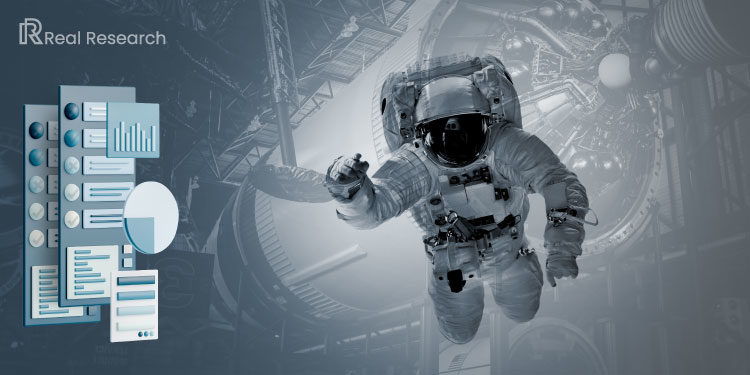 As the scramble for space tourism climbs, intrepid entrepreneurs such as Elon Musk with SpaceX, Burt Rutan with Scaled Composites, or Jeff Bezos with Blue Origin can’t stop eyeing the space travel business.

A 50-year-old event marking the first land on the moon — Apollo 11 launch — was just the first step toward space exploration that today tries to mark a new era by promoting space tourism. Space exploration that seemed to only be at millionaires’ reach now also interests the general public like the idea slowly comes to fruition within a distant future: mainly due to technological advances.

Countries like the USA, China, UAE, or Russia proclaimed that space travel would be a norm in the coming years. Entrepreneurs like Musk or Bezos also promise to not only create space travel possibilities but also make this phenomenon cheaper than ever.

Real Research prepared a survey where it asked thousands of people about the possibility of leaving Earth’s orbit, and the results were surprising — the vast majority of respondents to this survey would like to travel in a spacecraft.

Moreover, in a year in which private companies like SpaceX venture into space tourism, do ordinary people believe this will become a reality in the near future?

At Real Research, we wanted to see if, first of all, people had an idea of what the concept of ‘Space Tourism’ was. Surprisingly, the question ‘Are you aware of the idea of ‘Space Tourism’?, 54.1% (541) of respondents said yes, while only 2.2% (22) said they did not believe in space tourism. 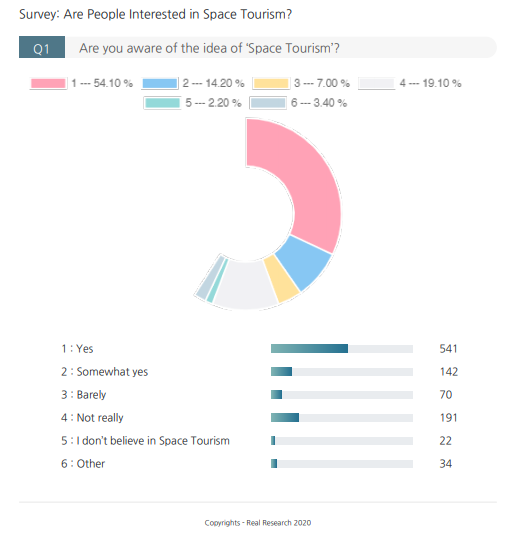 People are increasingly aware of the idea of space tourism, and there is only a minority who do not believe that this may be possible. The remaining opinions are divided between somewhat yes with 14.2% (142) of the votes and not really with 19.1% (191).

50 % of Respondents Would “Definitely” go on a Space Trip

With the answer to the questionnaire’s first question, “Are you aware of the idea of ‘Space Tourism’?” we had already realized when analyzing the graphs that the answers would be predominantly positive. Still, it was surprising to see that 49.6% (496) of the respondents — which is almost half — responded “Yes definitely” to the question, “If Space Tourism became an easier-to-access reality, would you like to take a trip into space? “.

In this sense, it is possible to understand that if companies like SpaceX or Blue Origin fulfill what they set out to make traveling to space more accessible and affordable, they can count on waiting-lists when it comes to space enthusiasts. 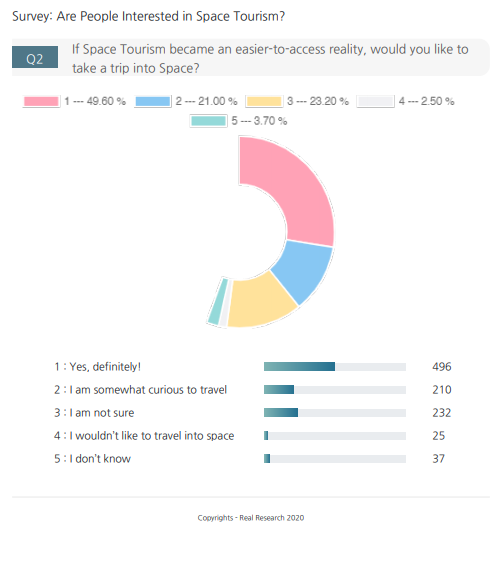 The curious and doubtful also share the percentages of answers to this question. “I am not sure” was the second most given answer with 23.2% (232) of the answers, followed by the response “: I am somewhat curious to travel” with 21% (210). Once again, only an infinite number of respondents are not interested in leaving their holidays outside Earth’s orbit, with only 2.5% (25) of the respondents saying, “I wound up like to travel into space.”

Perhaps out of fear or lack of curiosity, but what is the fact and that the negative responses to the interest in knowing what is beyond our planet are almost nil.

Perhaps, as data analysts, we cannot express how impressed we the confidence that people show in the future of space tourism in the short term. To the question “How many more years do you think it might take for Space Tourism to become a norm?” the majority of respondents (44.8%) said “5 years or less”. This response was followed by 5 to 10 years (25.9%) and 10 to 20 years (25.9%). 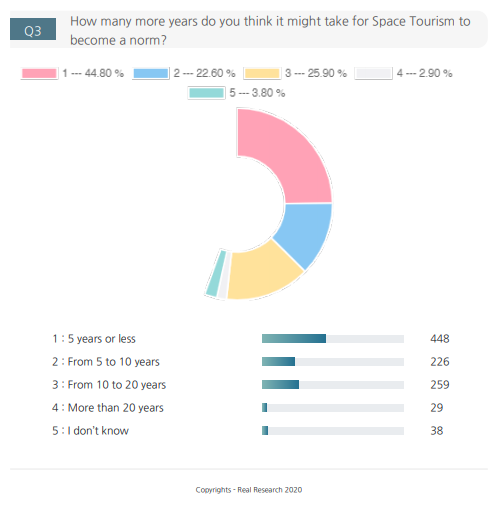 Of these respondents, 60% sharply add that national governments should invest in space exploration. 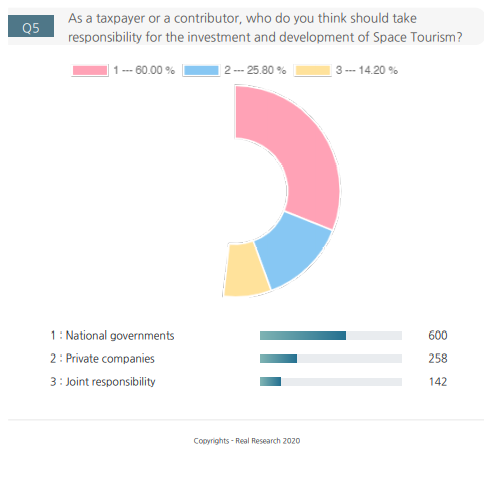 Taxpayers or contributors want their governments to invest in space travel, with only 25.8% of respondents believing that private companies should invest in this matter.

What would be the main reason for people to take a trip into Space? Here, opinions are divided. “Observe Earth from space” has a prominent place with 32.8% of responses, followed by experiencing no gravity with 23.7%. “Set footprints on the moon or other planets” takes third place with 22.3% of respondents. More scientific reasons such as scientific exploration or experiencing an astronaut’s life have little emphasis on this question, which shows people’s willingness to live an adventure outside Earth’s orbit. 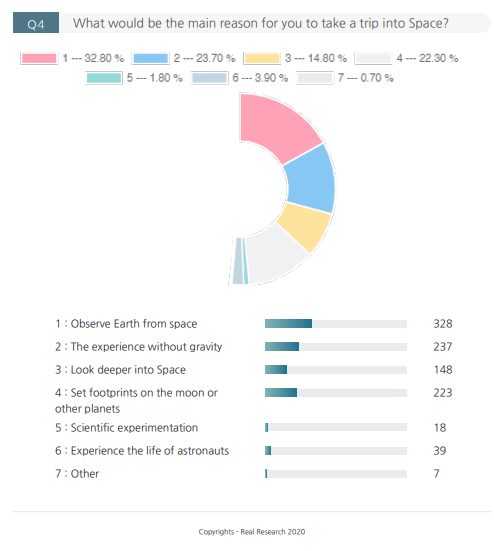 It is interesting to note that just 50 years after Apollo 11 was launched out of the Earth’s orbit, people’s curiosity has grown so exponentially to visit space. It must be, in fact, extraordinary to realize how small we are when compared to the entire spatial dimension or how blue our planet is when observed from the dark.

Our survey responses showed that space enthusiasts are many and that they are willing to exchange conventional holidays for exciting trips into space.