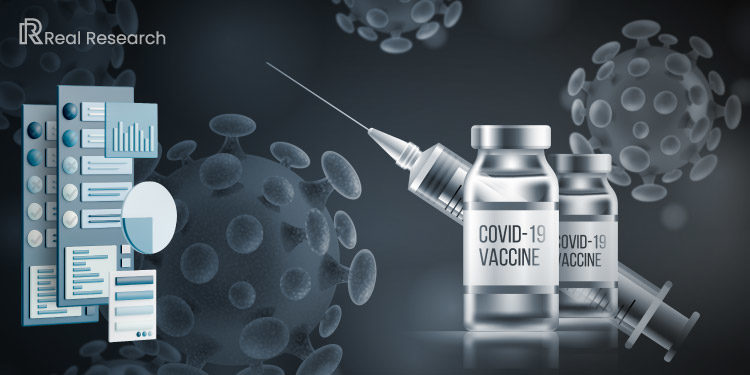 The pandemic has now reached its one-year anniversary as a global pandemic. Last year’s scenario started by figuring out what the cause of the virus was, where it originated, knowing its symptoms, and making a vaccine. Months after, vaccines were available but the problem doesn’t end there. Now, developed and developing countries are doing everything they can to buy vaccines from big pharmaceutical companies like Pfizer.

Meanwhile, Pfizer announced this January 2021 that it will provide up to 40 million of its COVID-19 vaccine doses to poorer countries on a non-profit basis. This will be possible through the globally-pooled Covax facility when Covax signed an agreement with Pfizer. Dozens of the world’s richer countries have already begun their vaccination campaigns. However, it is the opposite for poor countries. They must take huge loans or request help from other countries and organizations just to provide vaccines to their citizens.

In line with this, Real Research conducted a public poll to find out what people think about the fair allocation for COVID-19 vaccines in developed and developing countries. We will see if the respondents think the vaccines are reaching both the privileged and less privileged places.

Furthermore, we will also find the respondents’ thoughts on Pfizer’s plan to provide 40 million doses of vaccine for the privileged and less privileged people by the end of 2021.

Is fair allocation for Covid-19 vaccine possible? This is the question that most people are trying to figure out for the past few months. Hence, a global initiative, COVAX, was formed nine months ago to ensure fair and equitable access to COVID-19 vaccines for every country.

With that said, respondents were asked about their opinion on this matter. The majority of the respondents agree that there should be fair and equal access to COVID-19 vaccines in every country.

61.97% of them responded ‘yes’, 19.96% answered ‘no’, while 18.07% said they are ‘unsure’ about it. This is surprising because it’s quite a significant number of people who think there would be no fair allocation. This could probably be because most developed countries would just buy the vaccines they wish to get. While developing countries will most likely gain access to free vaccines, developed countries can access both. 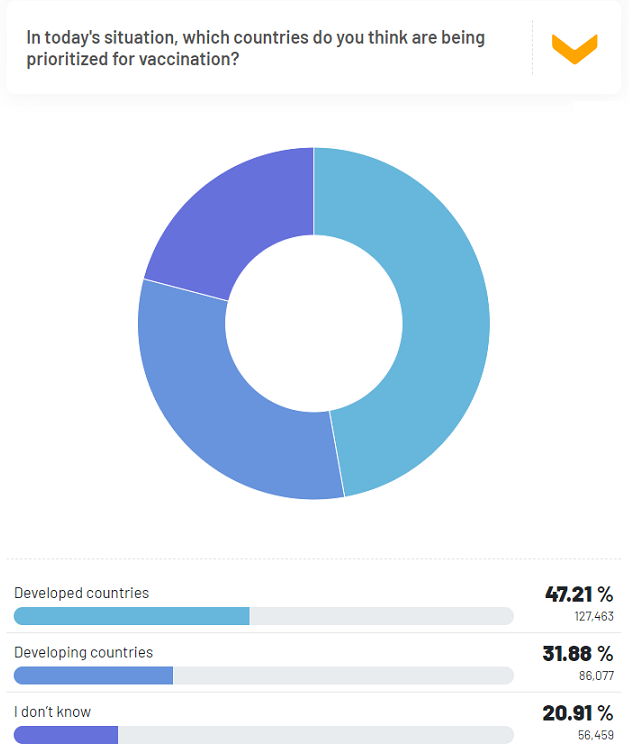 In current times, driven by fear,  there is a possibility of richer countries hoarding all available vaccines. In contrast, this leaves almost none for the poorer countries. Respondents chose which countries they feel are on the priority list. Is it the developed countries or the developing countries?

47.21% believe that developed countries are first on the vaccination priority list. Meanwhile, 31.88% said that first on the list is developing countries. Some 20% do not know what countries are on priority. Additionally, it is possible that this 20% think the vaccine allocation is fair. A lot of reasons could have led to them siding with this option, but one certainly could be that these respondents, in particular, may not be aware of the news surrounding vaccine hoardings.

In addition to that, respondents were also asked if they agree that developed countries will be able to vaccinate their citizens before many developing countries, almost 60% of them agree. Just 20% said ‘No’ while the remaining 20% responded ‘I don’t know’.

During the virtual conference on January 2021, Pfizer chairman Albert Bourla said, “developing countries should have the same access to vaccines as the rest of the world.” They also said that they will provide the vaccine to Covax facilities for developing countries on a not-for-profit basis.

Now the pressure is on Pfizer. Can Pfizer-BioNTech provide 40 million doses of vaccines?

Another concern given this situation is that the rich countries are willing to pay a heavy price to ignore the needs of the world’s poorest and most vulnerable people. This does not bode well for the less privileged nations as they will have lower chances of acquiring the vaccines. So, is it really possible to have a fair allocation for COVID-19 vaccines?

When asked whether they think Pfizer-BioNTech can provide 40 million doses of vaccine for the privileged and less privileged people by the end of 2021, the majority believe in this feat. Exactly 58.33% of the total respondents think Pfizer can really pull this off. Meanwhile, only 17.98% do not believe that this feat is possible by the end of 2021.

Furthermore, with the recent news that Pfizer signed an agreement with Covax to help end this pandemic, almost 60% of the respondents think Pfizer can provide 40 million doses of COVID-19 vaccine for the privileged and less privileged people by the end of 2021.