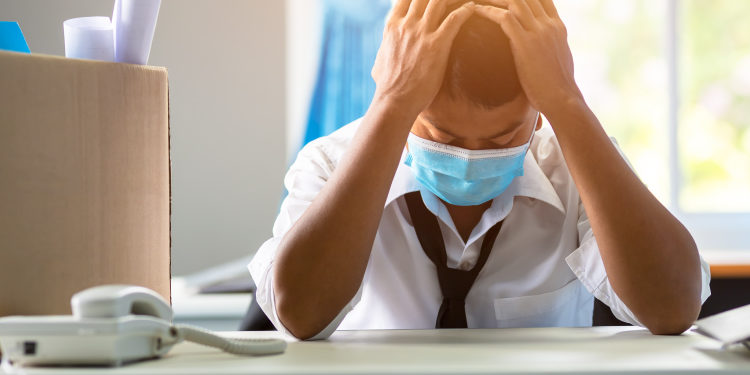 All major institutions, including banks, significant consultants, and research companies, are studying the COVID-19 effect on the world’s economy. Unemployment is one of the factors that most concern analysts. This phenomenon has been growing in all areas, from big enterprises to workers in informal economies.

The effects of the novel coronavirus are different in each area, but without exception, the pandemic has increased the number of unemployed people in all corners of the world. COVID-19 has resulted in a significant rise in the unemployment rate in all corners of the world. By looking into studies published by the World Bank and International Labor Organization (ILO), it is possible to understand the devastating impacts of this pandemic on the global economy.

To prevent the spread of the COVID-19 virus, sanitation and social distancing guidelines were enacted almost everywhere in the world. Quarantine became the ultimate fundamental safety measure to save people’s lives and to prevent the collapse of health associations that are overwhelmed with patients fighting for recovery. As an economic and social consequence, the disruption in people’s daily lifestyle resulted in a rapid increase in unemployment worldwide.

According to the World Bank’s Global Economic Prospects report, the COVID-19 pandemic will shrink the global economy by 5.2 percent this year. This phenomenon represents the deepest recession since World War ll and will have dramatic consequences in the numbers of extreme poverty. The report shows the effect on advanced economies such as the United States, the Euro Area, and Japan, with economies shrinking at 7.7%, 8.4%, 7.9% rate, respectively. It also shows the less noticeable but still negative effects on Emerging Markets and Developing Economies (EMDEs).

The baseline forecast from the World Bank envisions the most profound global collapse in decades. The same report also highlights the urgent need for policy actions to cushion COVID’s consequences. Among the measures presented, the study suggests the protection of vulnerable populations and the improvement of countries’ capacity to cope with similar future events.

Below is a visual representation of the global growth noted in the first half of 2020. It shows a drop that has never been seen before, in all parts of the globe. 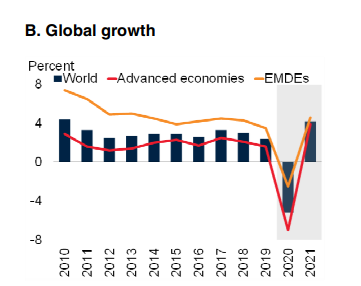 The same report analyzed the economic effects and, particularly, unemployment rates worldwide and by region, with particular focus on East Asia and Pacific, Europe and Central Asia, Latin America and the Caribbean, Middle East and North Africa, South Asia, and Sub-Saharan Africa.

The results are more dramatic in the United States since it is the country with the highest number of infected people, having thousands of cases being reported every day since the start of the pandemic.

Unemployment has always been difficult to measure. However, according to the World Bank study mentioned in this report, adding data from the United Nations (UN), hundreds of millions of people could be left without work due to the impact of COVID-19. Unemployment figures are most notorious in the US, with the country being most affected by the virus.

The rapid rise of COVID-19 cases, together with the wide range of measures to slow the spread of the virus, has precipitously slowed economic activity in many Emerging Market and Developing Economies (EMDE). That said, all EMDE regions are foreseen to contract in 2020, likely causing many millions to fall back into poverty.

The informal economy workers have been massively affected by the COVID-19 pandemic, according to the latest ILO data on the labor market impact. The ILO Monitor third edition: COVID-19 and the world of work report also stated that hundreds of millions of enterprises worldwide are suffering as well.

The continued sharp drop in working hours globally due to the COVID-19 outbreak means that 1.6 billion workers in the informal economy — that is approximately half of the global workforce —stand in critical risk of having their livelihoods shattered, according to the International Labour Organization report.

According to the same study, the drop in working hours in the second quarter of 2020 is expected to be massively worse than previously estimated.

Compared to the fourth quarter of 2019 (pre-crisis levels) 10.5 percent decline is now envisioned. This is comparable to 305 million full-time jobs (assuming a 48-hour working week), according to ILO’s analysts’ in-depth analysis. The previous estimate was for a 6.7 percent drop, equivalent to 195 million full-time workers. This is due to the prolongation and extension of lockdown measures.

Regionally, the situation has worsened for all significant regional groups. The study suggests a 12.4 percent loss of working hours in the second quarter of the year for the Americas (compared to pre-crisis levels) and 11.8 percent for Europe and Central Asia. The calculations for the rest of the regional groups follow closely and are all above 9.5 percent.

ILO estimates that big enterprises around the world are also at risk. The study estimates that “at-risk-workers” are more vulnerable after the severe economic output noted after measuring the measures taken to restrain the spread of the virus. Based on the study, the hardest-hit sectors named are accommodation and food services, manufacturing, wholesale and retail trade, and real estate and business activities.

The same study also shows areas less affected by the pandemic, despite the restrictive measures, sectors such as education, utilities. Public administration, among others, are not expected to be as affected as the jobs mentioned above.

The study, which includes 191 countries worldwide representing 90 percent of global employment concluded that despite apparent differences between sectors, the deterioration in economic and labor conditions is undeniable. ILO’s values ​​align with World Bank’s values, with both studies realizing the global impact of the pandemic on unemployment rates.

Going back to the World Bank study, having been its last observation in April 2020, the fall in global manufacturing for both advanced economies and EDMEs is abrupt.

In the case of tourism, a significant contributor to the growth of global employment rates is one of the sectors most affected by the pandemic. Once again, the drop in percentages in this business is repeated as in previous analyzes as shown in the following chart.

In this report, a comparison was made with the great recession of 2009. Even so, the COVID-19 pandemic showed even more frightening values in the first half of 2020 despite the short period of data available.

According to the World Bank’s study, the current projections suggest that the COVID-19 global recession will cause the world’s most considerable fraction of economies experiencing declines in per capita output since 1870. The output of emerging market and developing economies (EMDEs) is also expected to contract in 2020 for the first time in at least 60 years. The current global recession is also unprecedented in that global growth forecasts have been revised down more steeply and rapidly than in any other recessions since at least 1990. The progressive nature of forecast downgrades in previous global recessions suggests that further declines may be in store as forecasters absorb new information about the pandemic’s evolution. As such, additional policy measures to support activity may be needed in the coming months or years.