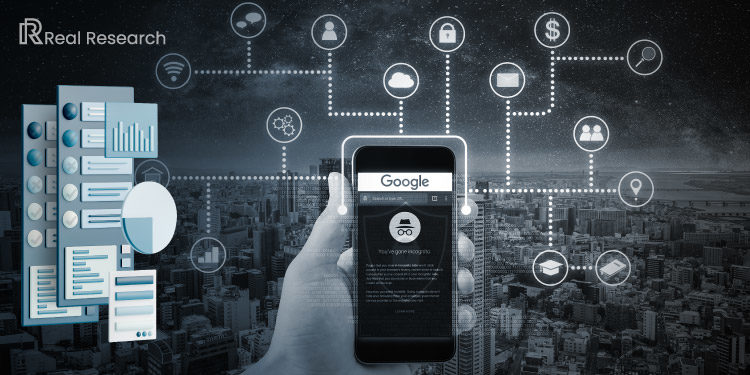 Google is facing a $5 billion lawsuit for allegedly tracking its users’ data, even when on incognito mode. The lawsuit alleges Google violates wiretapping and privacy laws for hijacking, tracking, and collecting users’ data when Chrome’s Incognito mode is in use.

According to Bloomberg’s report, Google has requested a dismissal regarding this lawsuit only to have the request denied by the federal judge. They also responded to this issue by saying that the company neither tracks any user activity nor saves any cookies on devices linked to any accounts.

In line with this, Real Research surveyed to determine how aware the public is of this lawsuit and if they think Google is tracking user activities to sell and earn profits. Is Google violating user privacy?

● About 80% of respondents use Google as their default browser.
● Nearly 46% are aware that Google is facing a $5 billion lawsuit over tracking users in Incognito mode.
● 29% said that it’s true Google is notorious for tracking and selling user data.
● Almost 31% think that Google doesn’t track user activity or save any data.
● Around 29% of people agree with the judge for rejecting Google’s appeal.
● The majority think governments should place penalties on companies for data policy breaches.

Most of the Respondents use Google as Their Default Browser

With millions of users, Google is known to be the fastest web browser. With one click, it loads web pages, multiple tabs, and applications with lightning speed. Google is a clean and straightforward browser. Users can customize and make it their own.

Furthermore, Google Chrome offers an easy-to-use experience, more built extensions, and many other features that allow you to stay organized and browse freely and quickly. Users can also sync all their data from their mobile phones to their laptops easily.

This shows that many people use Google as their default browser because of speed, simplicity, security or privacy, customization, and synchronization of data with their mobile phones.

Recently, Google has been issued a $5 billion lawsuit over data tracking in Chrome’s incognito mode. This private mode is commonly known as ‘incognito’ when using the Chrome browser.  Reuters wrote that the suit seeks at least $5 billion in damages from the search engine giant — nearly $5,000 per user.

When asked if they are aware that Google has been issued with a $5 billion lawsuit for tracking users’ activities with incognito mode, 46% said they are very much aware of it, followed by 29% of people who are also mindful of the news. However, 20% said they are not aware of the information, and 5% replied that they don’t use Google.

Moreover, 9% believe that the statement is somewhat false. On the other hand, almost 17% of participants don’t know whether it is true or false.

As a result, many people are aware of the lawsuit issued against Google and believe that Google is renowned for tracking and selling users’ data to earn profits.

The complaint indicates that Google can’t continue to engage in “covert and unauthorized data collection from virtually every American with a computer or phone.”

However, Google’s spokesman Jose Castaneda said the company would vigorously defend itself against the claims. He also noted that Incognito mode in Chrome gives you a choice to browse the internet without your activity being saved. To continue, he said that the time you open a new incognito tab, websites might be able to collect data about your browsing activity during your session.

In line with this, 31% of people agree with Google’s response. Also, 24% said that Google doesn’t track user activity or save any cookies on devices linked to Google user accounts. Meanwhile, 27% are neutral on Google’s reply. However, 10% and 7% both disagree with Google’s answer.

Additionally, 29% of respondents agree with the federal judge who denied Google’s request to dismiss the lawsuit. On top of these people, 24% also agree with the ruling. On the other hand, 29% don’t know whether they agree or disagree with the verdict.

However, 10% of the participants somewhat agree, and 7% strongly disagree with the ruling to dismiss Google’s request.

The hearing was conducted remotely via Cisco Webex video conferencing. Following this, the majority (56%) believe that governments should place extreme punishments for companies’ data policy breaches. However, a small number (19%) joined the social media giants’ side and said no. Meanwhile, a significant number (25%) said maybe the governments should place penalties for these companies in case of data breaches.

This result shows that many people want governments to take measures that will help keep their information and activities private and safe.