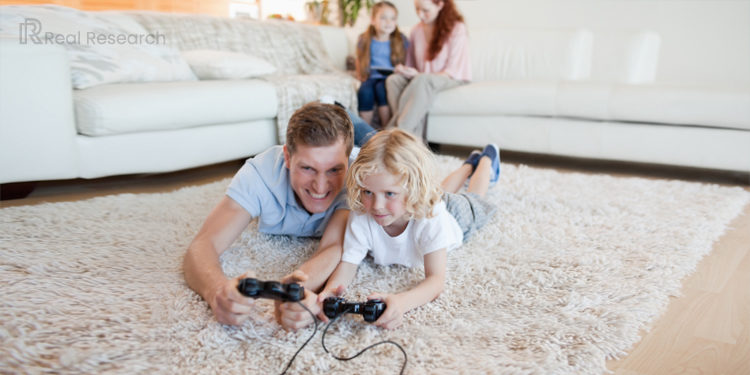 When most of the people are obliged to stay at home during COVID-19, certain entertainment habits were observed among the stay-at-home population.

When the novel coronavirus started to spread, one-by-one governments imposed national lockdowns and home quarantines. Most people found themselves confined within the boundaries of their residence. During these dreadful times, people turned to available media entertainment as their refuge.

In this article, we featured the findings of a coronavirus international study conducted by Web Global Index. The researchers fielded the survey in 13 nations: Australia, Brazil, China, France, Germany, Italy, Japan, Singapore, South Africa, Spain, United Kingdom, the Philippines, and the United States. Every country was chosen, factoring in the geographical spread and the levels of government-imposed lockdowns.

Web Global Index claims to have fielded 7 out of 10 internet users who stayed at home and chose to self-isolate; the findings show a substantial insight on how people spend their time during the lockdown.

Also Read: Udemy Research: What Are People Learning During the Online Education Boom?

Based on the results, the top activities being regularly done by the respondents while at home are: watching more news coverage (67%), spending more time socializing with their household (53%), and watching shows on streaming services (51%).

When asked what activities the respondents engaged in during the lockdown, monitoring the news became the unanimous answer among all generations. Gen X led in this activity with a recorded score of 68%.

Other than watching news coverage, every generation has been observed to enjoy activities appropriate to their age group. During the stay-at-home season, the following insights surfaced the study一showing age does matter in activity preferences.

In terms of media consumption, from millennials to baby boomers are all inclined to watch more TV on broadcast channels compared to pre-pandemic days. Gen Z ranks the lowest in watching television as their generation prefers to listen to music on streaming services. 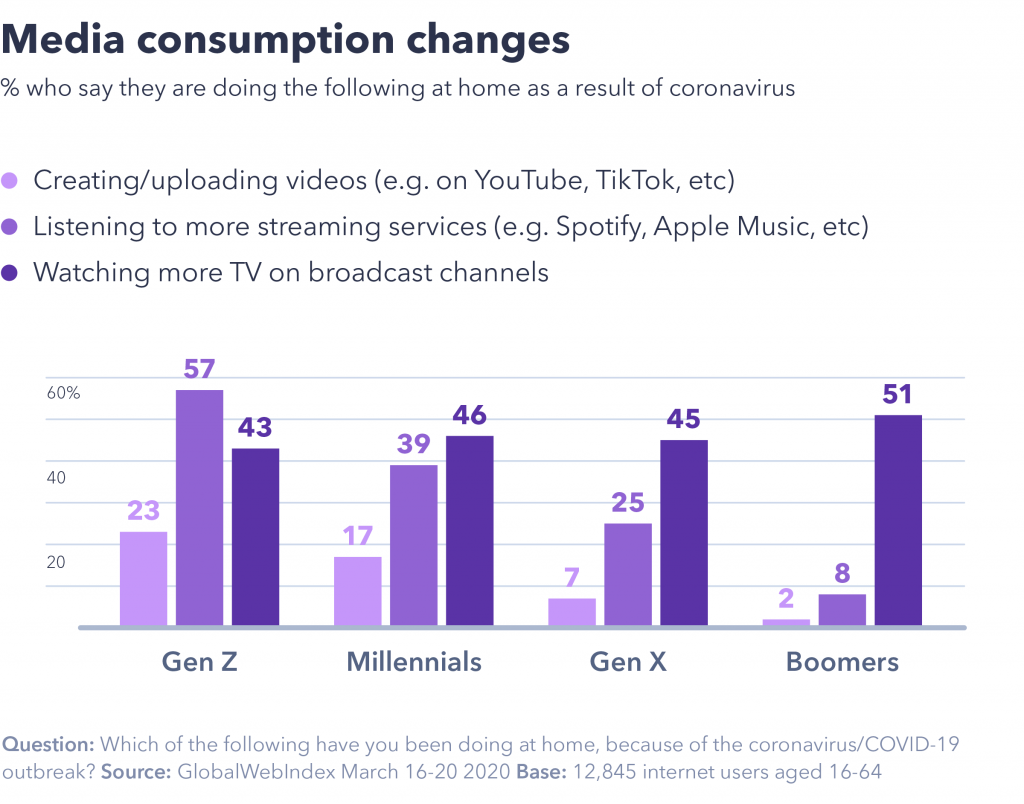 The image below is a cross-channel chart that illustrates how people engage in two media at once while at home due to the coronavirus pandemic. The result shows that about 70% of people at home tend to watch news coverage while tuning in to others such as music and video streaming services, as well as computer games. 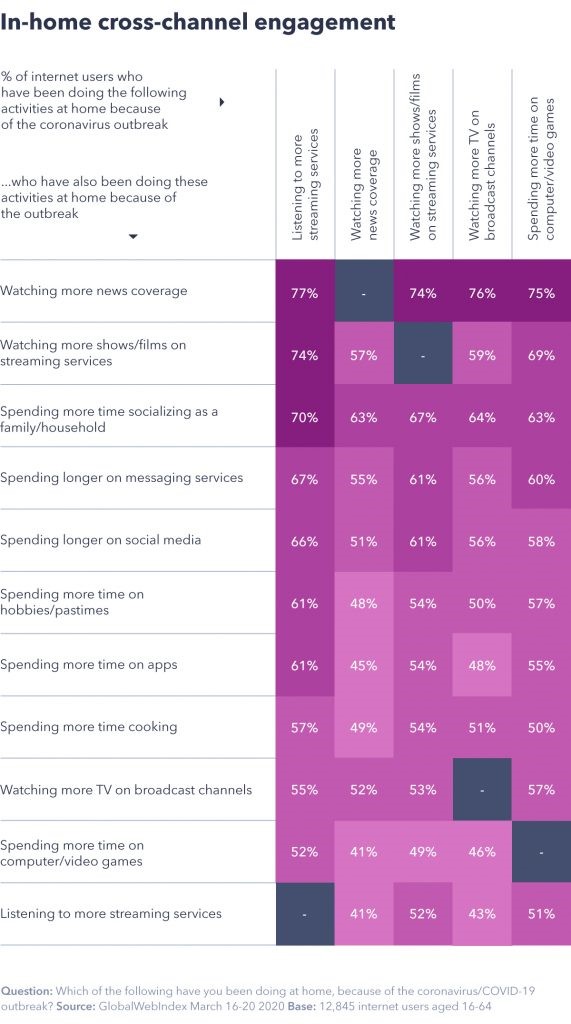 Also, garnering the 70% mark, people tend to rekindle the family connection by admitting to spending more time socializing with the family and the people within their household during the period.

The chart also shows that the two most active activities at home are being attentive to news and socializing while consuming other media services.

Though listening services such as Apple Music and Spotify see a high mark while being done alongside other activities; having the chart shows that it appears to be regarded as insignificant as an activity.

With more people stuck indoors, they are more exposed to media services more than before. There is a spike in watching shows and films on streaming channels like Netflix during the peak of the pandemic times.

As can be observed as well, television has been lagging behind online and gaming as an entertainment option. This fact strongly reveals the consumer preference shift from traditional media to digital media channels. 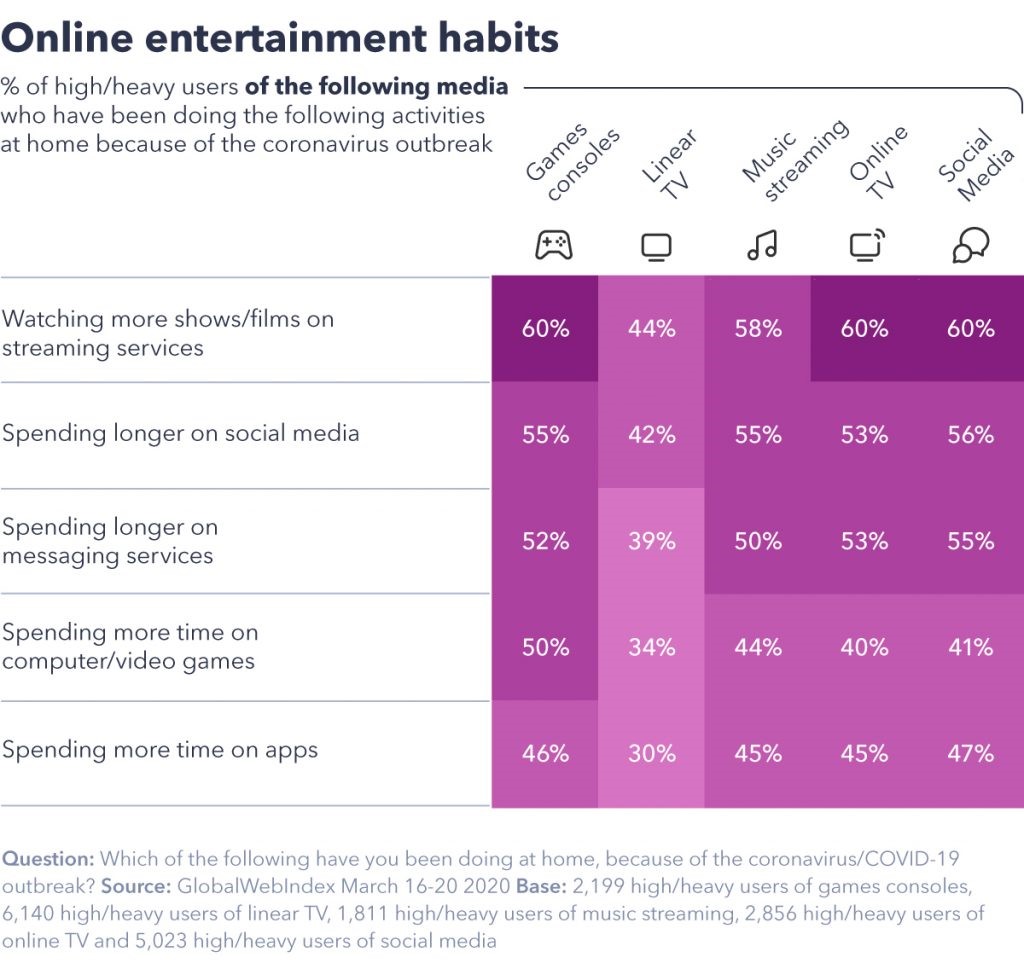 Also, digital advertising is surpassing traditional media in revenues. Tracking consumers’ media habits would grant advertisers good insights on where to position their digital campaigns. As revealed on Nielsen’s 6 Automobile Multicultural Consumer Insights, more consumers spend more time on media during the lockdown than during the pre-crisis season. And in times of market losses, it’s more important than ever for advertisers and marketers to leverage data to align their strategies accordingly.

Nordea Insights: How US Elections Affect Global Markets Through the Years