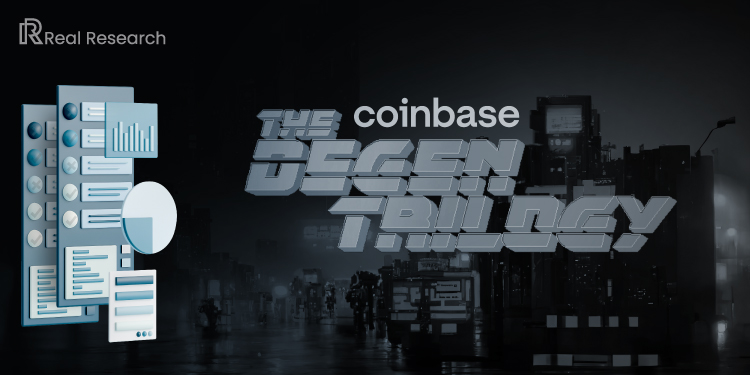 NFT has gone beyond its technology and has even reached the film industry. In recent years, there have been films sponsored by NFTs and at least a couple of documentary films about the NFT craze sweeping the internet. And just recently, there have been movies based on NFT collections.

Because of the popularity of the Bored Ape Yacht Club (BAYC) Metaverse, its developers have launched Coinbase’s Degen Trilogy. BAYC, the creator of ApeCoin, is one of the most expensive NFT brands that first declared its desire to create a three-part movie series in April 2022, garnered a lot of attention. For this reason, Real Research, an online survey app, launched a survey on Coinbase’s NFT film trilogy, “The Degen Trilogy”. Here are the results.

Coinbase has launched a revolutionary media effort in which the BAYC and ApeCoin communities play prominent roles in the three-part interactive film series, “The Degen Trilogy.” Accordingly, the survey on The Degen Trilogy asks if respondents are aware of the Coinbase NFT movie featuring BAYC and ApeCoin. In reply, 40% are aware and actively follow it. 18.98% have heard about it, and another 13% have heard about it but are unaware of the details. Meanwhile, 8.82% are uninterested in the film.

On March 19, just a few days after ApeCoin debuted, the teaser for The Degen Trilogy appeared on YouTube. The survey asks respondents what they think about the trailer. Up to 40.6% say the teaser looks promising, with another 12.18% feeling excited to see the movie. However, 8.51% felt disappointed.

Having watched The Degen Trilogy teaser, the survey asks if respondents would recommend it to others. Here, 38.55% would most definitely recommend the film, as well as another 21.08% who are definite in recommending it. In comparison, 8.66% would not endorse watching The Degen Trilogy.

Feelings and Expectations on the Upcoming Coinbase’s Degen Trilogy

Similarly, the survey gathered opinions on how respondents believe the general public would react to Coinbase’s Degen Trilogy. In response, 44.84% expect the movie will do well and draw more people toward cryptocurrency. In contrast, 11.79% anticipate it will fail to gather attention outside the realm of its community. While 13.41% believe it will make Coinbase, BAYC, and ApeCoin famous, 10.97% think it will flop and dissuade audiences from watching the same type of media.

NFTs to Embrace the Film Industry

Moreover, the survey asks if respondents think The Degen Trilogy will live up to expectations. In answer, 39.17 choose ‘Yes, most definitely,’ and 21.79% say ‘definitely.’ Although 8.52% believe it definitely would not.

Reports say other NFTs are also making their way from the blockchain to the big screen. The survey then asks what other community collaborations they would like to see happening in the future. Mostly (44.98%) want CryptoPunks, while others prefer Azuki (12.25%), Lady Ape Club (12.09%), and Goblintown (8.08%).

Finally, the survey on Coinbase’s first episode of NFT film trilogy asks what respondents feel about movies that feature NFTs. In this regard, 43.01% think movies need more content featuring NFTs, while 15.98% believe there should be more NFT-themed movies. However, 9.42% feel that NFTs should have no place in media.

Also Read: 30.80% Prefer To Invest in NFTs That Take The Form of Digital Artwork